Open Access in the Humanities: the need for a balanced approach 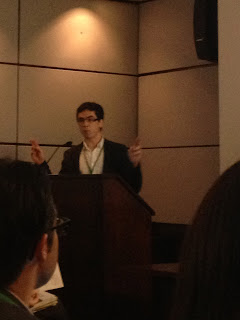 Thomas Parisot, Institutional Relations Officer at Cairn.info, discussed open access in the humanities at the Beyond the Rhetoric: New opportunities in open access seminar.

He provided an international perspective including some interesting statistics from France where peer review journals in humanities and social sciences are worth 17 million euros each year; collective works of research 5 million euros; research books 60  million euros; essays 111 million euros; general interest journals 5 million; and the average annual income of a journal is 8,500 euros.

With perhaps the best line of the day - 'open access, not open excess' - Thomas outlined the key challenges for the French market in terms of OA.

The big debate is around whether or not one size fits all. The article life cycle in humanities and social sciences is different to the sciences. with only 18 % of the interest raised in research institutions related to articles published the last 12 months. This difference between disciplines should prompt concerted reflection and actions among stakeholders. There have been on-going discussions with policy makers in France to support publication diversity, and an OA in HE working group was launched in Belgium, including publishers and libraries which hopes to define a reasonable mandate policy in open repositories.

He outlined the challenge of definition: what is a publicly funded research? If a philosopher works in a public university, but also, from time to time, for specialised newspapers, is an essayist writing an article in a peer-review journal and all this is based on several years of reflection and discussions with colleagues. If he publishes a book on the same subject one year later, what is it open access to? How can you define the access? It is difficult to assess what can be publicly funded or not. Another issue when trying to explain the differences between the humanities and social sciences when compared to STM to policy makers is the lack of data. They are trying to see what kind of data they can share - and also research and develop - to inform the decisions being made.

They are developing a range of new initiatives at Cairn including an international edition which will provide an interface in English enabling non-French speaking scholars to discover content of interest published in French. A platform has been launched currently, Heloise, developed in partnership between the French publishers association and CNRS, to inform authors of embargo periods defined by French publishers in the humanities and social sciences. They have also joined with a range of partners including a national radio station to debate the issue and raise awareness with an event planned for 15th February 2013.

Models can be probably be adapted but time, data, effort and caution is needed when it comes to the fragile economy of publications in the Humanities.
Posted by Suzanne Kavanagh at 09:43