Thinking of reviewing as mentoring

In this blog Siân Harris shares her personal experiences of being a peer reviewer for Learned Publishing.


Earlier this year I was contacted by Learned Publishing about reviewing a paper. This was an interesting experience for me because although I had been a researcher and then a commentator on scholarly publishing, including peer review, for many years, this was the first time I had done a review myself.

The paper I was invited to review was about publishing from a region outside the dominant geographies of North America and western Europe. Ensuring that scholarly publishing – and, in particular, the research that it disseminates – is genuinely global is something that I am passionate about (in my day job I work for INASP) so I was very happy to take on this review.

There have been plenty of complaints about peer review being provided freely to publishers and rarely recognized as part of an academic’s job description (it’s also not part of my non-academic job). And some researchers can feel bruised when their papers have been handled insensitively by peer reviewers.

On the other hand, there are powerful arguments for doing peer review in the interests of scholarship. What I’d not heard or realised until I did a review myself was how doing peer review is – or should be - a lot like mentoring. Since my time as a (chemistry) researcher I have regularly given others feedback about their papers, books and other written work, most recently as an AuthorAID mentor supporting early-career chemistry researchers in Africa and Asia. I also found, as I did the review, that I was very happy to put my name on it, even after recommending major revisions.

As I read the Learned Publishing paper I found I was reading it with that same mentoring lens and I realised there was an opportunity to help the authors not only to get their paper published but also to explain their research more clearly so that it has greater potential to make a difference. I wanted to encourage them to make their paper better — and to suggest what improvements they could make. Crucially, I didn’t feel like I was doing a review for the publisher; I felt I was doing the review for the authors and for the readers.

As I’ve seen with so many papers before, the paper had some really interesting data but the discussion was incomplete and a bit confusing in places; it felt to me a bit like an ill-fitting jacket for the research results. I made positive comments about the data and I made suggestions of things to improve. I hoped at the time that the authors found my feedback useful and constructive and so I was pleased that they responded quickly and positively.

The second version was much better than the first; a much clearer link was made between the data and the discussion and some answers had been given to many of those intriguing questions that had occurred to me in reading the first draft.We could have left it there but there were still some residual questions that the paper didn’t address, so in the second round I recommended further (minor) revisions.

Quickly, the third version of the paper came back to me. I know it can be frustrating for authors to keep revising manuscripts but the journey of this paper convinced me that it is worth it. The first version had great data that intrigued me and was very relevant to wider publishing conversations, but the discussion lacked both the connection and context to do the data justice. The second version was a reasonable paper but still had gaps between the data and the discussion that undermined the research. But the third version thrilled me because I realised I was reading something that other researchers would be interested in citing, and that could even be included in policy recommendations made in the authors’ country.

Having reflected on this process during this year's Peer Review Week with its theme of diversity, I am pleased that I read this paper and was able to provide feedback in a way that helped the authors to turn good data into an excellent article. First drafts of papers aren’t always easy to read, especially if the authors are not writing in their native language.  Authors can assume that readers will make connections between the results and the conclusions themselves, resulting in some things being inadequately explained. But peer review – and mentoring -– can help good research, from anywhere in the world, be communicated more clearly so that it is read, used and can make a difference.

Dr Siân Harris is a Communications Specialist at INASP.

Posted by Heidi Russell-Jones at 09:45 No comments: Links to this post

Why is innovation a challenge for established publishers?

Charles Thiede, CEO of tech startup Zapnito (and former CPO of Nature Publishing Group and CTO of Informa Business Intelligence), explores the theory of the innovator’s dilemma. And what publishers can learn from it.

In a couple of weeks’ time, I’m going to be chairing an event with ALPSP entitled ‘Innovate or Perish? How to think like a startup’. It’s got me thinking on the challenges of innovation within large publishers - challenges I’ve seen from the inside, as well as out.

I asked Zapnito advisor Mark Allin, former CEO of Wiley and a speaker at the event, for his view on how innovative publishing companies are at the moment. On a scale of 1-10, he gave them 3 or 4. That’s not ideal.

So why is this the case? There’s no question that the publishing industry is full of talent and resources. Yet startups are often seen as having the edge when it comes to innovation. The ‘innovator’s dilemma’ - a term coined by Clayton Christensen in 1997, offers insight into why that is. 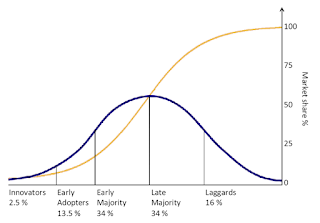 The problem isn’t necessarily lack of innovation itself, or enthusiasm to try new ideas, but more the environment in which those new ideas are developed and nurtured.

The value from new innovations isn’t realised immediately. It tends to follow an S-curve (see the yellow line on the graph). Improving a product takes time and many iterations, and quite often the early iterations provide minimal value. That can prove the sticking point for many businesses.

Ultimately, the primary aim of most established companies is to keep and add additional value to their existing customer base and their current business models. This means new and innovative ideas can be undervalued, because they are applied and tested with existing customers or through existing models, rather than looking at new markets or models.

It also means that if innovative ideas fail to deliver results quickly, they are seen as failing - the ROI is thought to be too low. In this case, often management acts ‘sensibly’, in what they view to be the company’s best fiduciary interests, and rejects continued investment in the innovation.

This is why startups, usually with little or nothing to lose when they enter the market, are so much more successful. They find new markets to apply their innovations, largely by trial and error, at low margins. Their nimbleness and low cost structures allow them to operate sustainably where established companies could not. They don’t have the same responsibilities to, for example, shareholders or existing customers.

At the same time, especially with ‘bootstrapped’ companies, startups must survive on their own two feet. This means that if the initial idea doesn’t work, they can adapt and even pivot their models. We did this at Zapnito early on. In contrast, for an established publisher, the initial idea is often fixed and changing direction means failure.

By finding the right application use and market, startups advance rapidly and hit the steep part of the S-curve, eventually entering the more mature markets of the established companies and disrupting them.

What’s the solution?
There is no one way to do innovation. But to me, the most vital change is a change in attitudes. Traditional publishers will need to think outside their traditional business models. Innovation does not need to be in context of existing ways of doing business. Too many media companies are organised around delivery models vs. solutions to a market. That leaves little room for innovation.

There’s also a need to start playing the long game and looking for ways to manage development processes so that it’s okay to change direction, or even to fail.

I also want to challenge the idea of innovation itself. Innovation does not mean invention. Most people think innovation and invention are synonymous. But Jeff Bezos did not invent ecommerce. Steve Jobs did not invent smartphones. The innovation happened in the execution of those ideas and how they were delivered to the market.

There are lots of potential ways for publishers to nurture more innovation within their companies. This could be through mergers and acquisitions (M&A), partnering with disruptive businesses, creating an internal ‘skunkworks’-style structure, or even separating out new innovations into offshoot companies.

These are all ideas I’m looking forward to exploring at the event. Hope to see you there.

The Innovate or Perish? seminar will take place on Thursday 15 November 2018. To find our more or to book your place visit: https://www.alpsp.org/Events/Innovate-or-Perish/60274
Posted by Susie Brown at 16:28 No comments: Links to this post