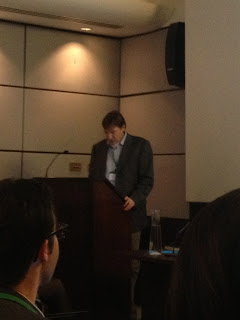 Open access ebooks have historically been overlooked in favour of their journal big brother. But as Eelco Ferwerda, Director at Open Access Publishing in European Networks (OAPEN), made clear in his morning session at Beyond the Rhetoric: new opportunities in open access seminar last week, they are a growing part of the publishing family and could well be the next big thing.

There is potential to explore open access for monographs to improve discoverability, usage and impact, while reducing costs through shared infrastructure and digital formats. And the provisional findings form OAPEN-NL, one of the pilot projects researching OA monographs, indicate this is only just starting, but enough is happening to take note.

Recent open access developments in books include some emerging business models such as the Open Access Publishing in European Networks Library which aims to 'improve the visibility and usability of high quality academic research by aggregating peer reviewed open access publications from across Europe'.

Other developments in 2012 include the Directory of Open Access Books which now has over 1250 books from 35 publishers listed.

The Public Knowledge Project has set up a beta software Open Monograph Press project. This is being piloted by a number of presses including Athabasca University Press, Open Humanities Press and the University of Murcia Publications in Spain, amongst others. This project is designed to facilitate uptake of OA software and could work for smaller publishers who need to start this kind of activity.

In August, SpringerOpen Books was launched at the Beijing International Book Fair. This provides authors with the opportunity to publish a book in the sciences that is fully open access immediately, making it freely accessible to anyone online via SpringerLink. Ferwerda pointed out the significance of OA books if a company like Springer is doing it

There is increasing discussion of and development of resources on OA books: at September's Open Access Scholarly Publishers Association conference in Budapest, there was an afternoon dedicated to OA books. Other useful resources include the Open Access Directory: a list of information, terms and resources, including books and OA publishers.

Jeffrey Beal has established Beall’s List. This highlights predatory, open-access publishers looking for APCs to make a quick buck and 'unprofessionally exploit the author-pays model of open-access publishing (Gold OA) for their own profit.' At the moment there are approximately 200 of them. This is a real concern for the industry.

Ferwerda provided a sobering reminder of why open access books should be considered: scholarly monographs have lost sustainability and relevance between 1980 and 2000 with sales to US libraries dropping, on average, from 2000 to 500. Publishers need for a new publishing model for academic books.

He profiled the publishers that are trying open access book publishing. They include large and small publishers in academic and non-academic disciplines, the latter comprising the largest part of the market with a lot of self-publishing. They are commercial and not-for-profit, from established organisations to start-ups, with institutional and professional markets that are professional and ‘scholar led’.

There are several models: from free to read (all rights reserved); to free to use and reuse (CC-BY); to non commercial and/or no derivatives. In terms of formats, it's a case of online versus downloads. From online reading only (HTML, e-reader formats) to PDF (personal copy) or both. OA book publishing motives range from front list publishing to a back list long tail approach. Some have a dedicated OA programme or service traditional monographs.

The business models include:
Examples of institutional subsidies include the Australian National University Press which has an E-press publishing OA monographs with the costs covered by ANU’s information budget. In Canada, Athabasca University Press receives support from government grants and from Athabasca University which together provide 80% of their budget. It was interesting to note that 1% of the overall university budget is allocated to the press for scholarly communication.

OA publication funds in the UK will be provided by the Research Councils to pay for the OA processing fee and it is likely that Germany will have something like this as well. New models are being explored such as OpenEdition Freemium which is a licensing model for libraries (so they take part in the funding of publication platform). It has been introduced as a pilot scheme and is based on the combination of free content in HTML + premium content (PDF, e-pub) and services, with a revenue split model.

The Knowledge Unlatched pilot launches next year whereby libraries form a global consortium, use existing acquisitions budget, select individually and purchase collectively. The price is based on fixed or ‘first digital copy’ costs and libraries receive a value-added edition. Monographs are then published open access.

A Swedish project has been established to achieve open access using existing funds for books: ‘Towards quality controlled Open Access Monographs in Sweden - exploring the possibilities of a consortium based approach.’

Ferwerda's own organisation, the Open Access Publishing in European Networks, has developed a Library which aggregates a collection of OA books to provide quality assurance, increase visibility and retrievability. They have more than 30 publishers with over 1000 books listed. He differentiated from other infrastructure services available as:


Other OAPEN projects include setting up limited publication funds for books (2-3 years) in different EU countries. They are looking to cooperation of research funders and publishers and want to measure the effect of OA on usage and sales to come up with guidelines and recommendations.

The pilots running in the UK and Netherlands are very similar. OAPEN-UK is managed by JISC Collections. There are five publishers in the UK including Taylor & Francis, Liverpool University Press, University of Wales Press, Berg and Palgrave Macmillan. They have come up against a reluctance from publishers to take part so at the moment there are 80 OA books in total from 13 publishers in the two countries.

They hope to measure the effects of OA on the following areas from this study:


While this is the early stage of the project - and there are limitations in the scale of the study - there are some observations they have been able to make. OA for books works by some measures. It improves discovery with three times higher visits and eight times higher page views in Google Books. OA books were also downloaded six and a half more times (but this is downloads not sales). So far, OA has NOT impacted sales, although it is too early for final conclusions. They have also tried to monitor the costs of books with total average costs of open access titles at 5678 euros while print is at 6489 euros. It is clear that there are still substantial costs for editing, acquiring and reviewing books with both approaches.

Time and data will shed further light on the realities of open access books, but it is worth taking time to consider the different options.
Posted by Suzanne Kavanagh at 17:34