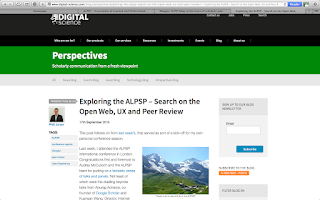 Phill Jones, Head of Publisher Outreach at Digital Science, reflects on the duelling keynote talks from Anurag Acharya, co-founder of Google Scholar and Kuansan Wang, Director, Internet Service Research Center at Microsoft Research in this blog post reflecting on the 2015 ALPSP Conference. He noted their very different views on academic discovery on the open web.

He reflects on the shift in customer base from library to researcher and the resulting revelations as publishers try to better understand their needs:

"Google is so firmly embedded in young researcher’s routines that they don’t even think about the fact that they use it. You wouldn’t expect somebody to tell you that they opened an internet browser, would you?"

The panel on peer review provoked the following thought:

"One reoccurring theme that emerged from the discussions: the fact too much is currently being asked of the peer-review process. With the mantra of "publish or perish" being truer now than it’s ever been, it can be argued that publishers find themselves unwittingly in the position of administering the process that decides whose career advances and whose doesn’t."

With that position comes great responsibility, something that will no doubt be considered in more detail during Peer Review Week to be held 28 September to 2 October 2015, a collaboration between ORCID, OpenScience and Wiley announced by Alice Meadows during the conference.