Rod Cookson, Editorial Director at Taylor & Francis reflects on the findings of the Open Access Learned Society survey produced in conjunction with ALPSP.

"Attitudes to Open Access are changing, with learned societies beginning to see Open Access as a business opportunity as well as a means of increasing outreach.

ALPSP and Taylor & Francis conducted a survey of learned society officers in April 2014, following up a similar survey from 2013. The sample size (139 responses, a 7% response rate) means this is a snapshot rather than a comprehensive poll, but it provides intriguing insight into the priorities of senior society officers today.

Societies finally seem to be shaking off recession and looking at the world with greater confidence. More than twice as many societies report rising member numbers rather than falling (42% up, 16% down), where last year nearly three out of ten were experiencing decline. Likewise more than a third of societies (35%) say that income from journal publishing is up, and half (51%) have flat financial performance.

Priorities have also changed. Two-thirds of societies (68%) strongly value a predictable financial return, rating this above a ‘healthy’ or ‘growing’ return. In 2013, ‘healthy’ scored highest. In uncertain times, societies desire an absence of financial surprises above all else.

Perhaps the most striking manifestation of greater self-assurance comes in the field of Open Access. A large majority of respondents (68%) believe that research published by their society should be free to read for all – intriguingly, identical to last year. Similar if less emphatic positivity has been reported in other surveys, including those by Wiley and EDP Sciences. 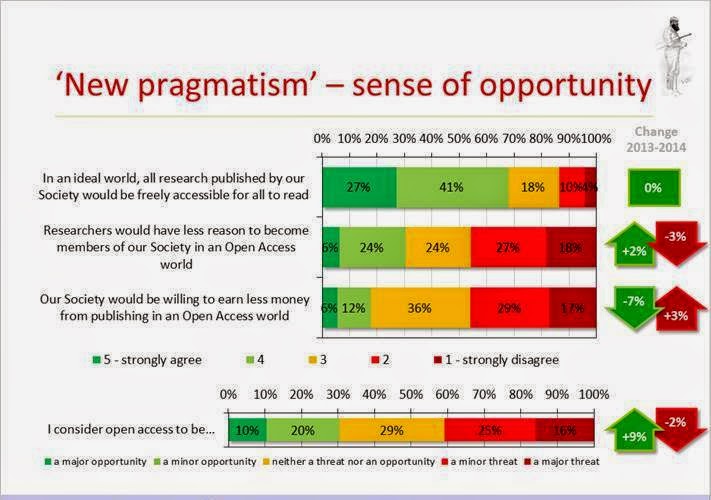 Many fewer of our respondents, however, are prepared to lose money making Open Access happen. Only 18% of societies say that they are willing to earn less money in an Open Access world, against 46% who are not. This is a 10% swing away from the ‘earn less’ position compared to our 2013 survey.

Anxiety remains that Open Access reduces the appeal of society membership. Close to half our respondents (45%) agree that OA gives members less reason to belong to societies, versus 30% who disagree. The gap is smaller than last year (a 20 percentage point differential has dropped to 15 points), but this issue clearly troubles many societies.

The biggest change of all comes in whether Open Access is opportunity or threat. Almost a third of respondents (30%) now see OA as an opportunity, compared to 41% who view is as a threat. Whilst ‘threat’ is still the larger number, the difference between these two camps has halved since 2013.

Is this the start of a ‘new pragmatism’ for societies about Open Access? Certainly fear seems to be giving way to a sense of practical opportunity. Looking ahead, nearly half of respondents (47%) say they are planning new Open Access journals. If OA is the new rock‘n’roll, societies are looking for a little less conversation, and a little more action…"

Rod Cookson is Editorial Director at Taylor & Francis. View the full survey on their website.
Posted by Suzanne Kavanagh at 15:39