Adam Marshall on Beyond the PDF2 in Amsterdam

Adam Marshall, currently Group Head of Marketing and Customer Services at the Portland Press, writes about the recent Beyond the PDF2 conference in Amsterdam.

"Held in wintery Amsterdam in the middle of March, the Beyond the PDF 2 conference (BTPDF2) was not really about the pdf vs. html for online publication and it was pleasing to see that it had also moved beyond a debate about open access vs. subscription publishing. For me the conference was quite unlike other publishing industry conferences I attend, and more of a brainstorming academic conference.

Over 200 attendees with more than half from academia including 33 students who received funding to attend, and less attendance by publishers than normal at information related meetings (but with a sizable group from Elsevier who were one of the sponsors), and with representation by a number of OA publishers (PLoS, PeerJ, Ubiquity Press, BMC, eLife). 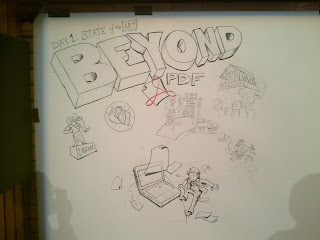 Steve Pettifer (Utopia/University of Manchester) one of the attendees at the first BTPDF conference in San Diego in 2011 and a member of the organizing committee this year sums it up:

"BTPDF2 was somewhere between a conference and an unconference -- and for my money managed to blend the best of both worlds. I think I was most struck by how engaged everyone seemed to be with pretty-much everyone else; these are turbulent times for scholarly communication, but it was clear this was a group of people who really wanted to get on with getting stuff going."

The two days were anchored with great keynotes from Kathleen Fitzpatrick (Modern Language Association) coming from a non-science discipline on Planned Obselesence and her experience with MLA Commons and Carol Tenopir (University of Tennessee) on Shaping the Future of Scholarly Communication, but after that the conference was turned over to a mix of short and longer “poster style” presentations from users and producers of data. I expect that we will see many of these appearing at publishing industry conferences in the year to come. As a publisher from a marketing background I found the conference very challenging and as a result I have tried to mention things new to me that others might want to follow up later.

Laura Czerniewicz and Michelle Willmers (University of Cape Town) provided some thoughtful southern hemisphere insight to publishing models in relation to different geographical and demographic contexts that  injected an element of reality which recurred throughout the meeting.

The new models of content creation sessions drew together a group of presenters who are building their own tools for content creation and aggregation. Nathan Jenkins a physicist from NY University presented Authorea an online platform used to write up and share research within your browser. Merce Crosas (Harvard) was one of a number of attendees interested in data citation principles and highlighting the Dataverse Network project. One of the subsequent outcomes of BTPDF2 was the initial draft of Amsterdam Manifesto on Data Citation Principles. Amalia Levi (University of Maryland) spoke about data in the context of studying communities where the data may not be online and Joost Kircz (University of Amsterdam) discussed the different practices in scientific reading.

Coming from a life science publisher the presentation by Lisa Girard (Harvard) on the 60-chapter open access StemBook was interesting showing the type of resource that could replace the traditional reference work, one of several projects built using the DOMEO annotation toolkit. This does bring up the thorny question of how such resources are funded, in this case by  Harvard Stem Cell Institute. Lisa’s talk sequenced nicely into the presentation by Pauli Ciccarese (Harvard) on Open Annotation and the need to have a uniform and pervasive method for describing digital resources, also based on the DOMEO toolkit.

With changing needs of writers and readers we have been experiencing a plethora of new dissemination models from existing and new hosts which were covered by the review of new models of content dissemination with speakers representing the deconstructing- and reinventing- the journal camps.

For the decoupled journal, Jason Priem with ImpactStory which aggregates altmetrics for researchers; Keith Collier with www.rubriq.com/ providing peer review independent of publisher or journal; Peter Brantley with www.hypothes.is an open-source platform for the collaborative evaluation of information by community peer-review; and Kaveh Bazargan, voted the most entertaining speaker on #btpdf2, putting the case for typesetting in the future model. Arguing the case for the reinvention of the journal were three recent representatives of open access publishing, Theodora Bloom for PLoS, Brian Hole from Ubiquity Press on the case for open scholarship and  the metajournal and Alf Eaton bringing us up to date with PeerJ. The connecting factor in many of the products mentioned was the use of open source software such as Git, IPython, drupal and DOMEO.

Following lunch on the first day was what for me was one of the least satisfying sessions which tried to get down to the real issues of money and how to make a credible business case for new systems and tools, and changes to existing ones with three business model representatives from Springer, Figshare and new to me Daniel O’Donnell talking about the Journal Incubator project which seeks to provide funding to train graduate students to be able to act as managing editors and production supervisors. The stakeholders were represented by David Prosser (RLUK), Dave deRoure (Oxford University) and another southern Africa speaker Eve Gray (University of Capetown).

While this session, coming at the end of the day, involved the most discussion between presenters and delegates, it did not draw out how the emerging models would be funded in the longer term while serving the needs of both current and future users regardless of discipline or location.

Steve Pettifer summed up the first day:
“For me the biggest lesson was realising how much can be learned in this space from the social sciences and humanities; it's all too easy for the future of scholarly communications to be dominated by science and technology. And the message that struck me most was the importance of aligning developments with the needs of the developing world: paraphrasing Eve Gray,  "Impact Factors kill in a literal sense".

The sessions on the second day took a more practical approach to the discussion. BTPDF2 was organized by Force11 with the aim to accelerate the pace of innovation in scholarly communications. This requires action and this session featured three framing talks around software, usability and data, followed by selected flash talks about technologies/tools/frameworks/standards/containers that need support or acceptance from scholars in some way to move them to the next level. The call to action was for the attendees to discuss these and come together as three or four breakout groups over lunch to try to turn some of the ideas into action plans such as the manifesto on Data Citation Principles mentioned earlier.

Points that stuck out for me were Asuncion Gomez-Perez from Madrid on the SEALS Platform for evaluation of semantic technologies;  Scott Edmunds on GigaScience open access journal from BMC; Melissa Haendel (OHSU) on the reproducibility of science; and Alex Garnett on the Public Knowledge Project to provide an automated XML publication pipeline.

Throughout the presentations the theme of reproducibility, usability, preservation, scalability, open data, sustainability, verifiability and data management recurred over and over.

Richard Padley of Semantico said:
“It was good that the humanities folks got some air time. Often STM can dominate the debate in a way that leaves out some of the very interesting humanities projects. Also it was refreshing that the usual debates about green/gold OA were fairly conspicuous by their absence. There was more talk about research reproducibility and data which I think will be forthcoming themes in the more conventional conferences on the circuit.”

In the penultimate session Carole Goble (University of Manchester) presented an interesting case for revising how we evaluate research and researchers and the importance of reproducibility and peer- evaluating as well as peer-reviewing before introducing a slightly tongue-in-cheek role-playing panel to discuss new models for evaluation of research and researchers with a researcher, a publisher, a start-up, a librarian, a funder and a university administrator (in the form of Phil Bourne, UCSD, who organized the first BTPDF meeting). If the ensuing discussion in any way represents real life we have a long way to go.

The meeting concluded with visions for the future with participants giving three minute presentations on how they would change scholarly communications and e-Science. These presentations had a serious side with a panel of experts judging which would be put forward for awards of $1000 to work on their ideas.

If you are interested in any of the projects or products mentioned in this review I urge you to look at the PTPDF2 website where participants continue to tweet on #BTPDF2 and if you want to participate further sign up to Force11.

To conclude Mark Patterson from eLife summed the meeting up:
“This was one of the most rich and energising meetings I've attended.  It brought together a really diverse group of people and covered a similarly diverse range of topics.  The connective tissue that holds it together is the shared interest in making something good happen, and the proof of its success I think is that many people (me included) seemed to go away with a list of things they wanted to explore and act on.”

Adam Marshall can be followed on Twitter via @adamjmarshall
Posted by Suzanne Kavanagh at 13:53