Spotlight on: Case Genie, built by 67 Bricks for ICLR

This year, the judges have selected a shortlist of seven for the ALPSP Awards for Innovation in Publishing.  Each finalist will be invited to showcase their innovation to industry peers on 14 September on the opening day of the ALPSP 2022 Conference in Manchester.
The winners will be announced at the Awards Dinner on Thursday 15 September.
In this series, we learn more about each of the finalists.

Tell us about your organization

67 Bricks is a technology consultancy specialising in supporting scholarly publishers to digitally transform. We’re best known for building great software to unlock publishers’ content and data and allow them to be more flexible in the way they meet customer needs - we’ve twice won the OpenAthens Best Publisher UX award for our content platform builds, first for Emerald in 2019, and this year for De Gruyter. Beyond that, we offer a full technology consultancy service - whether that’s through making better use of publishers’ internal data, developing bespoke software to solve specific problems, or guiding companies through a program of complete digital transformation - we’re here to help.

This entry is submitted with the support of the Incorporated Council of Law Reporting for England and Wales (ICLR). As well as the official Law Reports, ICLR publishes The Weekly Law Reports, The Industrial Cases Reports, The Business Law Reports, The Public and Third Sector Law Reports and the Consolidated Index to leading law reports. ICLR was established in 1865 by members of the legal profession and its mission is as important today as ever and explains why they are universally regarded as the most authoritative source of English case law.

What is the project/product that you submitted for the Awards?

As an increasing amount of legal case law is moved online, the question for barristers, law students and solicitors is ‘how do I find the cases I need that I don’t know about’? Enter Case Genie. Case Genie represents a real evolution to the way legal cases are constructed - taking the valuable database of case reports held by ICLR and creating a way to search for relevant cases quickly and intelligently. Using Artificial Intelligence (AI) in the form of Natural Language Processing (NLP) to analyse a user’s own document in order to identify the legal concepts and issues in it, the search tool then uses programmed intuition to suggest relevant cases from the ICLR database. Early results have been extremely positive and Case Genie has been named “a potential game-changer” by users. 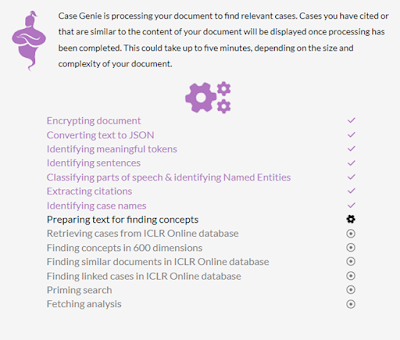 ICLR made its Case Reports and Indices available online over a decade ago. ICLR.4 makes it easy to see which important cases have been Affirmed or Overruled (there are, in fact, seventeen variations on these!). The contents of the Case Reports can also be searched, and this has been an important resource for judges, barristers, solicitors and magistrates.

What Case Genie adds to this, is the ability to prime the standard search with a starting document. As part of preparing a case, solicitors and barristers create formal legal documents (such as skeleton arguments) that summarise the case and its arguments. Such documents can be uploaded to ICLR.4, either whole or selected extracts, to find existing cases that are conceptually similar. These similar cases can be further expanded to include linked cases (important cases that cite or are cited by the similar cases). The results of these can be filtered using more traditional search facilities in ICLR.4. The aim is to help the lawyer find cases that they might not otherwise have considered.

In addition, Case Genie finds cases cited in the uploaded document and lists them with their subsequent treatment (Approved/Overruled etc). This can save the lawyer significant time.

Superadded to those, Case Genie facilitates finding similar paragraphs. When reading the judgment section of a Case Report, the user can click on a paragraph to find paragraphs from other judgments that are conceptually similar.

The team behind the tool is made up of both software developers and publishing consultants, who worked deeply with ICLR to really understand customer needs. Feedback from users was that the site’s search functionality was great when you knew what you were looking for, but the experience of finding content when you didn’t know where to start was much harder. We set about testing ideas and technical approaches to help users find ‘unknown unknowns’ when they were working in unfamiliar areas. After lots of iteration and validation, we settled on the ML/NLP approach as a way to leverage all of the valuable data and editorial content ICLR has to make relevant content more accessible to users.

In what ways do you think it demonstrates innovation?

There are several layers to this. Firstly, the tool uses unsupervised learning, which is crucial for avoiding bias in the output. Supervised learning uses example data that teach the ML algorithm how to predict a given outcome, which has all of the pitfalls of bias. Usually, the data have come from real-world decisions made by people, so it embodies the biases of those decisions. Unsupervised learning, however, is not based on previous human decisions. The models created by unsupervised learning map connections between data, but do not try to predict a specific variable. Case Genie uses unsupervised Machine Learning to build document embeddings for each Case Report and judgment transcript. The only biases it embodies are those of the judges in their language (but not their verdict or sentence), which are actually what we are most interested in! Language use changes over time, so two cases from a specific period are more likely to have high similarity if they cover similar topics. This is beneficial because it means more recent cases are likely to match new case material; whereas important, older cases will still surface in the results when added as linked results. The goal of using NLP and ML in this project is to surface surprising cases. We have worked very closely with ICLR to validate the results of Case Genie, because it requires a very high level of domain knowledge to determine whether a result is a surprising but good result; or just noise.

We have also had to work in new ways to ensure data privacy, as this was a very important aspect of the development for ICLR. The architecture of ICLR.4 is therefore built around the need to secure sensitive legal information in ongoing cases. Uploaded document data and information derived from it is never stored unencrypted. Two keys are required to unencrypt the data, one is stored in the system database and is unique for each user; the other is transient and created by the user’s browser for each user session. As soon as the original document has been processed, it is deleted. Derived ephemeral documents are deleted as soon as the initial processing pipeline has completed. The remaining data, required to show the user the results of the processing, is available only for the duration of the user’s session. For example, if they close their browser and use a fresh log-in, they will not be able to access their own results.

Finally, the tool has enabled ICLR to innovate on their own business models. Case Genie has switched the customer focus for ICLR from bigger institutions to smaller or even individual users, providing additional value and expanding the potential for ICLR to find new revenue streams in the future. This advances ICLR’s mission to make case law accessible by supporting access for individual users. As well as access, the tool also makes it easier for single individuals to build a case using whatever resources they currently have since the heavy lifting of searching for relevant cases is done automatically.

What are your plans for the future?

We have built the system with ongoing scale and development in mind. We have created a processing pipeline that is secure, can be built upon and is scalable. Scalability is essential for a system like this because NLP can be very processor intensive. We also have some large data indices that sit in memory so that they are blisteringly fast. We adapted the architecture to fit the changing needs as the system was built. The end result is that the system can easily be scaled out to support a larger number of users and new use cases for the machine learning model.

Visit the ALPSP Annual Conference 2022 Website for more details and to book your place.

Will Bailey, Head of Partnerships, 67 Bricks 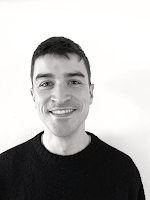