This year’s ALPSP conference may have felt very different to previous years – experienced in front of a screen in one’s office, living room, or kitchen instead of in a hotel conference centre sitting side by side with hundreds of one’s industry colleagues. It still addressed the key issues that scholarly publishing faces, though: open access, transparency and trust, and – perhaps more urgently than ever – diversity, equity, and inclusivity within an industry that still has much to do on those fronts.

The conference began on Wednesday evening with the announcement of the winners of the 2020 ALPSP Awards for Innovation in Publishing. From an exceptionally strong shortlist, the judges – led by David Sommer, co-founder of 2015 winner Kudos – choose two winners: Jus Mundi, the Paris-based multilingual search engine for international law, and WordToEPUB, a free EPUB creation tool with built-in accessibility features. Sustainable scholar-led open access publisher the Open Library of the Humanities was also highly commended.

The awards were swiftly followed by our opening keynote from Sherri Aldis, chief of United Nations Publications, who offered some insights into the organisation’s Sustainable Development Goals (SDGs), and what they might mean for scholarly publishing and research in the COVID-19 world. The seventeen goals, she explained, were a blueprint to achieve a better and more sustainable future for all by ending poverty, protecting the planet, and improving all lives; publishers, she said, had a vital role to play in achieving them.

Aldis noted that publishers had recognised not only that the SDGs aligned with their own missions but also that there was market demand for them too, and had consequently published more than 8,000 titles relating to them. Some – like Hachette’s children’s books 17 Ways to Save the World and Iqbal and his Ingenious Idea – were published in partnership with the UN, whose own titles were freely available but were also monetised through value-added enhancements. She shared some of the ways that publishers could contribute towards achieving the goals: promoting the SDG agenda by using its framework to categorise their content; reducing inequality by producing content accessible to people with disabilities; and adopting sustainable business practices through changes to supply chains and production. Aldis encouraged publishers to sign the new ten-point SDG Publishers’ Compact that would be launched at this year’s Frankfurt Book Fair, and to use the SDG logos to show their support.

The next day focused on “Transparency and trust in scholarly communication: changing access, business models and funding”. The afternoon began with a discussion of the long-term legacy of COVID-19 on trust and transparency. Chris Winchester, CEO of health science communications consultancy Oxford PharmaGenesis, noted publishers’ moves to make content freely available and reusable during the pandemic, and suggested that there’d be no going back from this; instead, the development would spread to other potentially life-changing and life-saving research. Introducing the Open Pharma initiative of which he is co-founder, he explained that its immediate priority is to secure for authors publishing company-funded research the same rights to publish open access as authors whose research is funded by other sources; eight publishers including PLOS, Wiley, and F1000 have already endorsed this position.

Winchester was followed by Marshall Brennan of the American Chemical Society, whose ability to deliver a compelling talk while simultaneously feeding a baby made him the star of the conference. Discussing the extreme public response to a preprint hosted on ChemRxiv criticising the use of hydroxychloroquine as a treatment for COVOD-19, Brennan considered the responsibilities preprint servers have to the general public in terms of correctly framing the research posted there; he also mentioned the steps ChemRxiv has taken in response to the controversy, such as retaining the right to deny posts it deems inappropriate, including those whose conclusions might lead a non-expert to take actions injurious to their health. The session’s final speaker, Simine Vazire of the University of Melbourne, argued that we need more nuance in peer review beyond acceptance and rejection, and noted that both incentives and human nature encourage researchers more towards making new discoveries than detecting errors in existing work.

The day’s second session explored a global direction for Open Access and Open Research. Rebecca Lawrence, Managing Director of F1000 Research, spoke of the varying attitudes towards open research across continents and disciplines, noting the particular challenges faced in the humanities and social sciences, where funding for publication can be problematic and output types may differ from those in the sciences. She was followed by Professor Judith Sutz of the University of the Republic in Uruguay, who shared some of the findings of her research into the design and implementation of university research policies and suggested that new tools and approaches were need to transform the research evaluation system.

Robert Kiley, Head of Open Research at the Wellcome Trust, then spoke about how cOAlition S aims to make OA a reality after more than a decade of talk. He was followed by Elizabeth Marincola of the African Academy of Sciences, who explored the many barriers to open access scientific publishing in that continent. She focused particularly on peer review – noting its systematic bias, the lack of representation of African researchers among reviewers, and their lack of familiarity with the nuances of the review process – before introducing AAS Open Research, a scholarly publishing platform offering the immediate publication of work by researchers supported by the AAS and its funded programs. The session’s final speaker was Alwaleed Alkhaja, copyright librarian at Qatar National Library, who observed the fall in journals supporting Arabic-language publishing – from 618 to 185 on DOAJ in the past five years – and shared some of the successes of the library’s open access fund, providing funding for OA publication on a national level, uniquely in the region.

Thursday’s final session explored business models for Open Access in a post COVID world. Vivian Berghahn, MD at Berghahn Books, described some of the different approaches the company had taken to fund open access publication, such as Knowledge Unlatched’s crowd-funded model for books and – in partnership with Libraria – Subscribe to Open for journals. Simon Ross, CEO of Manchester University Press, talked us through their journey towards having the largest output of open access books of any university press. Though OA titles may still sell – one sold 320 copies in print alongside 5,000 free downloads – it can be hard, he said, to make the economics work across a list, particularly when university presses are so dependent on print sales. He expected Manchester would continue to look at what he described as a ‘pick ’n’ mix’ of models, with direct-to-consumer sales offering potential compensation for the downturn in the institutional market. The session’s final speaker, Sara Rouhi, Director of Strategic Partnerships at PLOS, also emphasised the need for a mixed economy in open access, but her focus was on meeting the diverse needs of a wide range of stakeholders: a mixture of flat fees, institutional deposit accounts, PLOS Community Action Publishing, and bundled APCs for consortia could, she believed, enable the company to achieve cost recovery plus a capped 10% margin for reinvestment, while avoiding excluding researchers from publication.

The final day of this year’s conference explored how publishers can deliver a more inclusive and diverse scholarly communication ecosystem. Patrick H. Alexander, Director of the Pennsylvania State University Press, kicked off the opening session, “Diversity and Inclusion in our sector: what do we know, and where do we need to do more?” with two telling observations: that there is not a single university press at any of the 107 historically black colleges in the US, and that there are only 2 BAME heads of the American members of the Association of University Presses. Ruth Howells, Deputy Director of External Affairs at the Publishers Association, shared some statistics from the association’s survey of the wider UK publishing industry which showed that 13% of its employees were BAME, 10% LGB+, and 1% transgender; 19%, meanwhile, had attended an independent or fee-paying school. Nancy Roberts of Umbrella called for pay transparency as a means of increasing the diversity of talent applying for roles and decreasing the gender gap; she also noted in passing how much advocacy work is uncompensated. Anoushka Dossa, Director of Talent at Creative Access, closed the panel by speaking about the organisation’s #morethanwords campaign which invites employers to commit to change in hiring diverse candidates; investing in staff from under-represented groups to progress to senior roles; and creating an inclusive workplace where diverse staff feel valued.

The second session focused on “Creating Diverse and Inclusive products, tools and services”. Opening speaker Nicola Nugent (Publishing Manager for Quality and Ethics at the Royal Society of Chemistry) discussed several reports that the RSC had produced on women's retention and progression in the chemical sciences and whether publishing in the chemical sciences is gender biased, and the organisation’s framework for action in scientific publishing: Improving inclusion and diversity in the chemical sciences and the joint commitment for action on inclusion and diversity in publishing. Magdalena Skipper (Editor in Chief at Nature), then addressed the importance of inclusion within peer review, while Jennifer Gibson discussed the ways in which eLife, where she is Head of Open Research Communication, has prioritised diversity and inclusion, with particular successes in geographical diversity and sexual orientation inclusion. 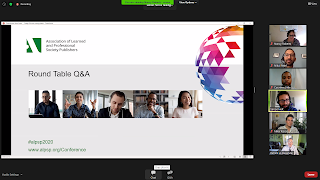 The conference’s final panel session explored the impact of COVID-19 on our ability to create a diverse and inclusive publishing industry. Professor Edda Tandi Lwoga of the College of Business Education in Tanzania shared some of the consequences of the virus on African research and publishing, noting that funding has been diverted and fieldwork and conferences delayed, with slow, limited, or expensive connectivity creating additional problems; more positively, however, collaboration has increased. Randy Townsend shared how the American Geophysical Union, where he is Director of Publications Operations, has used the pandemic and the killing of George Floyd as a ‘respectful opportunity’ to identify and implement improvements in its diversity, equity, and inclusion through Eight Deliberate Steps ranging from diversifying the organisation’s governance and committees through to partnering with leaders across STEM to remove systemic racism and foster culture change. Simone Taylor of AIP Publishing then shared data from the Workplace Equity Project, noting how the experience of working from home varies hugely according to personal circumstances can cause feelings of isolation and exclusion.

You can find out more about this year’s conference on the ALPSP website.

By Alastair Horne, Lecturer in Publishing at the University of Stirling