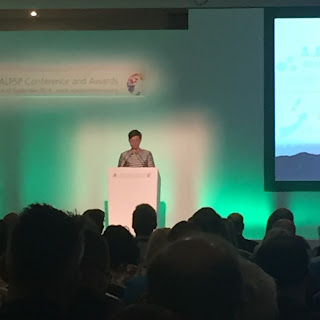 Zoe Harris, Group Marketing Director at Trinity Mirror Plc kicked off the ALPSP Conference with the keynote. She has worked in TV, magazines and advertising: who better to hear from about how other industries have dealt with and embraced disruption?

Trinity Mirror have learned that the local, regional and national press can no longer be suspicious of each other. Tabloid newspapers have a bad reputation, but The Mirror is passionate about being different. Yes, they want to entertain, but they also want to inform, investigate and campaign.

In such a challenged market revenues with 10% year on year readership decline 20% year on year advertising decline, with digital revenues slow to make up shortfall, how do they adapt?

They have looked outside and inside for inspiration. They have learnt to have a thick skin and be resilient. Disruption is everywhere. Netflix is disrupting pay TV. Airbnb has in five years become the main hotel chain rival selling more rooms than the whole Hilton group worldwide. Uber has totally changed the taxi business forever. You no longer give an address, you give a postcode: a fundamental change in behaviour. Online estate agents like Rightmove hit Trinity Mirror hard. Five years ago they had £150m revenue in this area. It dropped to around £30m in 2015. There has been an explosion of disruptive news brands including: HuffPost Buzzed and Facebook.

For Trinity Mirror, they have skilled journalists, trusted brands, scale and reach, experienced commercial teams as well as strong branding nationwide. It's easy to get stuck in a rut becoming afraid to change anything from the past.

Audi asked their engineers how could they win a race if our car could go no faster than anyone else? By phrasing it that way, they looked at other areas of development. The answer was fuel efficiency. They won the next three years.

Newspapers often look at problems the wrong way. The decline in The Mirror readership isn't a recent trend. It's been happening over decades driven by digital, behavioural trends and competitor activity. Crucially, the demographics of the UK have changed. it has gone from a pyramid upper class, middle class, working class to a diamond shaped elite, bulging middle classes and breadline existence.

The three forces of change they face are the recession as a social leveller, connectedness available to all, and a post-industrial workforce. Today, their readership have inherited values, achievable aspirations, and a tighter network. In addition, traditional news is less valuable than before. The main issues lapsed readers have with current offerings have:

There are a number of initiatives they have tried. You need to have a thick skin, fail fast, and work fast to adapt to disruption and change. One part of their response was to launch a national newspaper - New Day - which shut two months after launch. They always had a plan to have a go and if they were going to fail, to fail fast.

With data journalism they have built a specialist team that monitor, scrape, analyse and use Freedom of Information laws to research and find new stories. Looking through data to create news stories for their titles. They also create engaging and interactive gadgets to make the news personal to the audience. By making data personally relevant to them they can make them care about issues that should matter to them all as well as hold councils and governments to account.

They have also used content curation. Clipboard, News 360 and other services have built big markets quickly. New and different opinions rarely get seen where we have our filter bubbles of online services that use algorithms to find content you will like. Trinity Mirror launched a new app - Perspecs - a curated news application. It offers three different perspectives on each news story from other sources. It adds diverse opinion and transparency. It also facilitates the discovery of new sources.

The fast reproduction of content is a real challenge and the speed and breadth of local coverage. For their regional titles, being part of that local life is what they've always done. Now they're doing it differently, because that's what readers want. They work with police forces, local courts and sport clubs reporting on their own matches. They have seen huge increases in local traffic. They have set about doing this by focusing on local knowledge and building a connect with local readers who want to reach out to them. This also builds a strong local advertising platform for sustainability.

How? They've focused on audience data. While page views are their primary metric, they listen to others such as time spent on page, bounce rate and percentage of readers who are local. While journalists have strong gut instinct about the local audience wants, but it's important to get out to meet people combined with understanding the audience.

They have also doubled down on audience analytics, finding out what they know works and ask themselves what else might. It is passion and belief that will give you determination to meet changing needs of your communities. But it is the ability to expect the unexpected and adapt that will see you through.

Zoe Harris is Group Marketing Director at Trinity Mirror Plc. She provided the opening keynote address at the 2016 ALPSP Conference.

Posted by Suzanne Kavanagh at 15:34